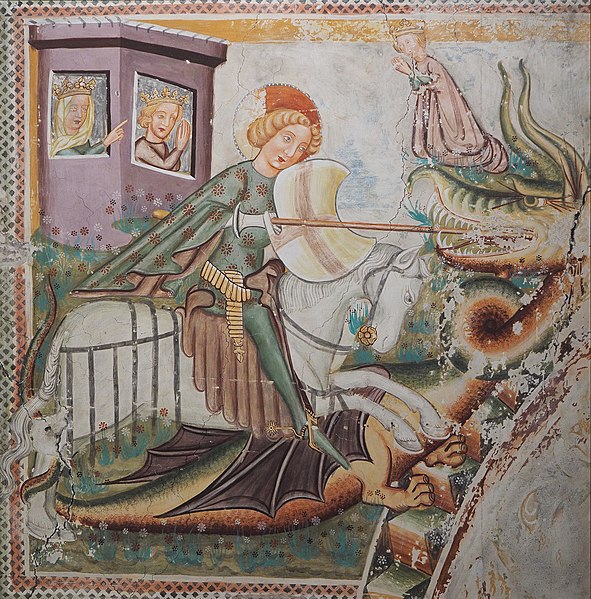 Dragons appear in different cultures across the world. Each myth describes a different appearance, though often similar to a lizard or snake. Some myths illustrate dragons as a bit of a nuisance, while others describe terrifying flying creatures that breathe fire. They have become common creatures in popular culture and fascinate people worldwide.

There are many different dragons that appear in English mythology.

A famous sighting of a suspected dragon was in 793. The Anglo-Saxon Chronicle claimed a fire-breathing dragon was spotted flying above Northumbria. It is likely this was actually a comet.

The image of a dragon as a fire-breathing monster with huge wings is common, though most English myths describe dragons differently. They are typically portrayed as crawling creatures that spout poison. They don’t have wings and live in caves or marshes. The Lambton Worm and The Stockburn Worm are two examples of this depiction from Northern England.

English folklore portrays dragons as kidnapping maidens from castles, resulting in a battle with a hero. The hero then slays them and rescues the maiden.

There is a good chance that people living in medieval England believed in dragons. This was obviously before the internet existed, so information spread through written chronicles and word of mouth. People believed that disease spread through poisoned air. Mainly affected were marshes, a habitat for dragons. One story features a dragon that terrorised Dunster in the Somerset levels, before it was banished by St Carantoc.

The dragon was both terrifying and noble to people. Dragons feature on many coats of arms. This image of the dragon was commonly a lizard-like, winged creature, breaking from earlier tradition.

English tradition claims Dragon Hill in South Oxfordshire as the site of the legendary battle between St George and a dragon. The dragon wanted to eat the King’s daughter, so St George bravely fought and killed it. The white spots of chalk on the hill that are still visible today are rumoured to be from the dragon’s toxic blood killing the grass.

It is the medieval depiction of a dragon that appeared in the legend of King Arthur. King Arthur’s father, Uther Pendragon, used the dragon as the royal insignia. The legend also tells of Merlin having a vision of a red dragon fighting a white dragon. He believed the red dragon symbolised Britons and the white dragon symbolised Saxons. Oxford Castle is the birthplace of the legends of King Arthur. The Historia Regum Britanniae (also known as The History of the Kings of Britain) by Geoffrey of Monmouth popularised the story. When written in 1136, it was viewed as an account of history. At the time Geoffrey was serving at Oxford Castle. Its accuracy was first challenged under the Tudors. While it is now considered a work of fiction, Geoffrey claimed it was a translated version of ancient books.

We have the perfect Easter holidays event for any children who love dragons: adopt a dragon sessions! Find out more: https://www.oxfordcastleandprison.co.uk/adopt-a-dragon/. No possibly venomous dragons will be on-site for the event, we promise.