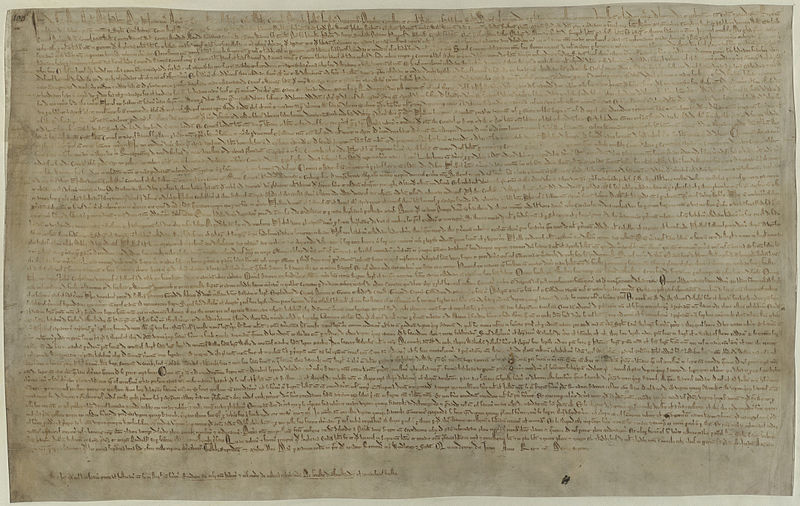 Celebrating 800 years since the Magna Carta – How was Oxford involved?

The Magna Carta is considered to be one of the most important documents in history. Signed 800 years ago by King John of England, it essentially agrees that everyone, including monarchs, are subject to the Law.

The Magna Carta is considered to be one of the most important documents in history. Signed 800 years ago by King John of England, it essentially agrees that everyone, including monarchs, are subject to the Law. Since the original document was signed in Runnymede on 15 June 1215, it has been substantially rewritten but is still considered to be one of the most famous documents in the world. Explore more about the Magna Carta at the British Library’s exhibition, Law, Liberty and Legacy, open until 1st September.

The Magna Carta was produced as a peace treaty between King John and rebel Barons to try and prevent all-out rebellion and war in England. King John ruled under a vis et voluntas principle, often making decisions on the basis that he was above the law and hence able to do whatever he liked. There was no provision for what would happen if the King refused to abide by the law so the Magna Carta sought to change this.

From Oxford Castle Unlocked’s perspective, the Castle would have been well established in 1215. The motte and bailey, Saxon Tower and Norman chapel would all have been standing on the castle site and the inhabitants would have been keeping a keen eye on the events unfolding between King John and his unhappy Barons. But did Oxford play any part in the Magna Carta?

King John was actually born in Oxford on Christmas Eve 1167 at Beaumont Palace (which no longer stands but would have been located near Beaumont Street in the city centre). He sponsored discussions in Oxford between his agents and the rebel Barons during the Spring of 1215 to resolve their differences, and seven points produced at these discussions made it into the Magna Carta, which was signed mere months later.

There are many updates and rewrites based on the original Magna Carta document. Three copies of a subsequent charter signed in 1217 and one from 1225 are held by the Bodleian library. As the document evolved, it became regarded as England’s first written constitution from 1258 when the Provisions of Oxford were signed. Updated in 1259 to become the Provisions of Westminster and eventually annulled in 1266, the values laid out in this document had a significant effect upon the development of the English Common Law system and has undoubtedly moulded the society we live in today.

If you could make anything into a law, what would it be and why? Let us know on Twitter