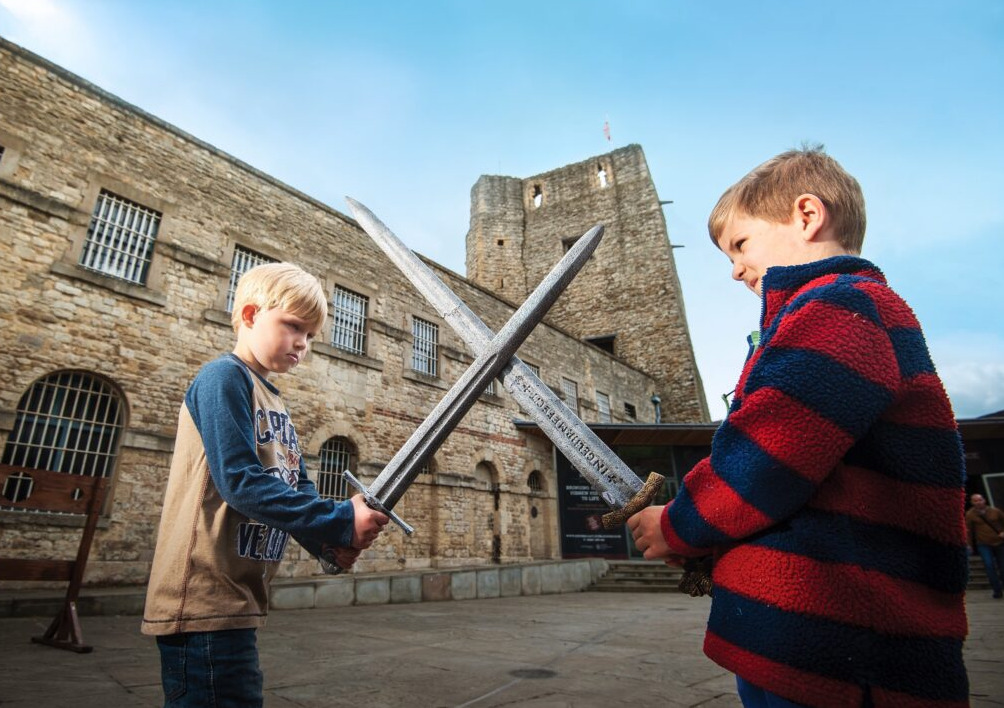 Knights – and their female equivalents, Dames – are still around today. Modern knights and dames have been honoured by the Queen for a great achievement. However, they are very different from knights in medieval England.

Who were Knights in Medieval England?

Medieval knights were warriors. They usually fought in armour and on horseback. They were different from the other fights on the battlefield because they had been “knighted” in a special ceremony.

The ceremonies were often very elaborate and expensive during peacetime. The “accolade” was the most important part: the knight would receive a light tap on the neck with a first or a sword by the king or another significant person. You may recognise this from modern ceremonies where the Queen will tap knights with a sword. During wars, often only the accolade would be performed.

When they were not fighting in battles, knights would practice in tournaments. The first tournaments were the mêlée. A mêlée was a mock cavalry battle where knights would aim to capture knights on the opposing side and hold them for ransom selling their captives’, weapons, armour and even horses back to them at an extortionate price. A successful knight could win great fame and fortune from fighting in a melee. This was seen as perfect practice for the battlefield. This form of tournament was eventually refined into the joust. Knights rode towards each other and would try to knock the other off their horse with their lances.

Knights first appeared in the Battle of Hastings in 1066. Norman Knights wore long chain-mail skirts called “hauberks” and pointed, open-faced helmets. They fought with shields shaped like a long kite and long spears which they would throw in a similar way to a javelin or could hold them couched under the arm in the same way that knights of later centuries would hold a lance.

During The Hundred Years War between England and France (1337-1453), knights started to wear iron and steel plate armour covering their entire bodies: the famous “suits of armour”. These became more elaborate during the Wars of the Roses (1455-1485). During these wars longbow arrows became the deadly weapon of choice as the huge volume of arrows massed archers could shoot at their enemies could devastate the enemy and disrupt their movement across the battlefield. Cavalry charges became less effective and knights started to fight on foot, their full body protected by the suits of armour. The Battle of Flodden (1513) was one of the final big battles in England where knights wore full armour.

Famous knights include Sir William Perveril, a trusted knight of William the Conqueror, and Sir Henry “Hotspur” Percy, who earned his nickname by riding quickly during battle and of course William Marshal, who served five English kings and is commonly known as the ‘best knight that ever lived.’

The legend of King Arthur and his court is a famous example. The first mention of this legend is in “Historia Regum Britanniae”. It is also known as “The History of the Kings of Britain”, by Geoffrey of Monmouth. Geoffrey lived in Oxford and served at Oxford Castle, likely as a secular canon at the college of St George.

The knights in the legend of King Arthur are known as the Knights of the Round Table. The most famous include Sir Lancelot. It is thought they are not based on historical figures and were actually inspired by figures from Scottish, French, Welsh and English legends.

King Arthur is preparing for his next quest this summer and has asked us to train his new knights for battle! Kids can learn sword handling, shield skills and jousting skills during the session. Find out more here